After posts focused on development work (Gradle and Debugging), this week we'll look at a topic more related to marketing: screen capturing. For promo or instructional videos, it's often necessary to record what's happening on the screen. In this blog post, we'll show you three options.

In Android Studio, switch to the "Android Monitor" view and on the left side you'll find a small button "Screen Record". 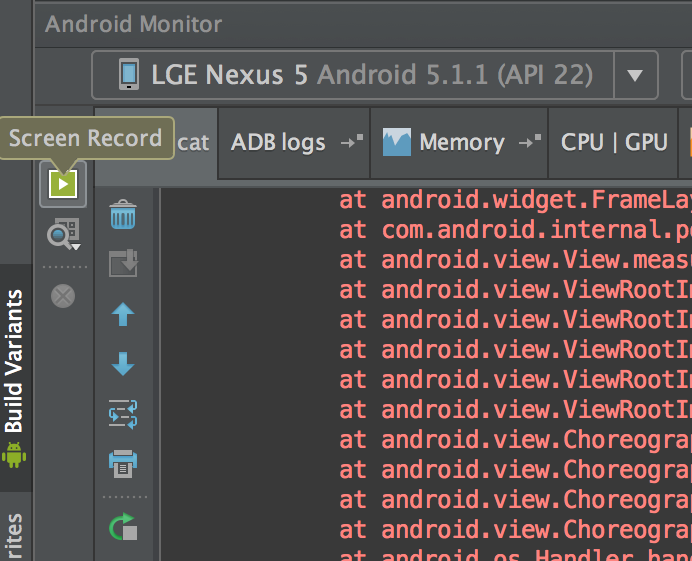 Hit that button while having a device or emulator connected via adb and you'll be able to take a high-quality video from your app. The video will be saved as mp4 directly on your developer machine.

Using an App for Android 5.0+: Telecine

If the person, who wants to record the video is not a developer and doesn't want to struggle through the setup of Android Studio, he can use Telecine.

The app makes it super easy to record videos directly on the phone without any further setup. The only drawback: it only works for phones with Android 5.0 or newer.

Unfortunately, not all phones have Android 5.0 or newer yet. But no worries, there is a solution for non-developers and older phones: screen mirroring. There are a bunch of companies offering solutions to mirror the Android screen to your computer. It's very easy to capture that video stream and thus you're also able to record your phone's screen.

Our favorite solution is Mobizen. It's easy to setup, well-rounded and our clients have used Mobizen in the past to record issues, which are hard to describe in words.

Lastly, don't forget to activate Settings > Developer Options > Show Touches. Otherwise it's really hard to guess for the viewer where the user tapped or swiped the screen.

We hope that one of the three options is viable for you and you've learned something new. Do you have another great way of recording the screen? Let us know in the comments!